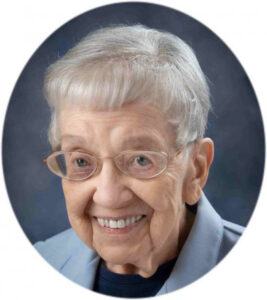 Sister Victoria Eisenman was born on April 25, 1928 to Francis A. and Margaret Fussinger Eisenman and named Audrey Jean. She was the older of two children; her brother Jerry (now deceased) followed.

At that time Sr. Victoria said her goal during her years at VMA had been to establish “those values of the Benedictine community which have given so much life and peace to me.” She promoted the school’s Benedictine identity consistently and left behind materials to assist the school’s leadership in carrying on that work.

After “retiring”, Sr. Victoria served as a liaison between the day care and monastery, oversaw dorm rental, kept current the personal records of community members, and enjoyed having adequate time for personal prayer, spiritual reading, and visiting in the infirmary. She commented that she gets “great pleasure helping people who have trouble moving freely or who need any kind of assistance.” For fun she played the dulcimer, worked jigsaw and word puzzles. In her younger years she loved to dance and laughed easily throughout her life.

Sr. Victoria moved to the infirmary in 2017. She was amazed with the way the infirm sisters patiently awaited the Lord’s coming and asked, “May God grant me the grace to do likewise.”

Sr. Victoria died on June 28, 2022, preceded in death by her parents Francis and Margaret Eisenman and her brother Jerry. She is survived by her nieces, nephews, friends and her Benedictine community.

Vigil service was held the evening of July 5 and the Mass of Christian Burial on July 6, 2022 followed by interment at St. Walburg Cemetery.

One thought on “Sr. Victoria Eisenman”